The 1952 Helsinki Summer Games were the first Olympics in which the Soviet Union participated since the 1912 Games. The Games were friendly, and by the end of the competition Soviet officials had opened their village to all athletes. The Helsinki Games marked the return of German and Japanese teams to Olympic competition. East Germany had applied for participation in the Games but was denied, and the German team consisted of athletes from West Germany only.

Melbourne 1956 Olympic Games were the 13th occurrence of the modern Olympic Games and the first held in the Southern Hemisphere and it was the first time marched into the closing ceremonies together, not segregated by nation.

Torquay was chosen as the site for the international surf carnival during these Olympic Games as a demonstration for Olympic visitors.

Dick Garrard Snr participated in the wrestling competition for the third time and Col French was a water polo team member again. Peter John Bennett (1926-2012), Torquay Surf Life Saving club member was chosen for three Australian Olympic water polo teams; but only played in two. He was chosen in the team to attend London 1948 but opted out to pursue his budding career with St Kilda in the Victorian Football League (VFL). He was captain of the water polo team at Helsinki 1952 and vice-captain, at Melbourne 1956. Peter was also a member of the Gold Medal Team at the 1950 Auckland Empire Games (Commonwealth Games).

Peter showed his prowess on the field and in the water from an early age. His swimming took off in 1937 as a junior at the Melbourne Club (now Melbourne Collegians), where his father had made a name from 1904.

A revered all-round sportsman, Peter was also a surf swimming champion at Torquay, club belt champion 1948 and Surf race champion 1949. He became the Victorian open senior surf champion in 1948 and 1950, and an accomplished golfer at Kingston Heath.

Prior to his sports career, he had served as a private in the Australian Army during the Second World War. In 2012, he was inducted into the Water Polo Australia Hall of Fame.

His first wife, Marjorie McQuade, was a champion Australian swimmer and fellow Olympian.

Kevin was active in sport as a teenager swimming with the Mordialloc Life Saving Club and playing football with Mordialloc. After giving up football Kevin began to take wrestling more seriously with the encouragement of his coach. He won his division in the Victorian Championships and went on to contest the Australian Championships in 1951. Following this success, he was selected as a member of the Australian Olympic Team to compete at Helsinki in 1952.

With very short notice the International Wrestling Federation invited Australia to send its best wrestlers to the 1954 World Championships to be held in Tokyo in May. Kevin travelled to Tokyo where he performed well and at the conclusion of the competition was ranked eighth in the world.

Two years later, commencing in November 1956, the Olympic Games were held in Melbourne and Kevin was again in the wrestling team. 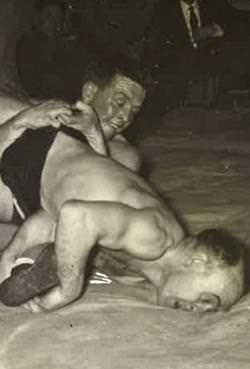 Joe Sweeney (1933-2016) competed in the men’s Greco-Roman bantamweight at the 1956 Melbourne Summer Olympics. Joe joined Torquay Surf Life Saving Club in 1953 and was the club’s Senior Surf Race Champion in 1955. Joe was also instrumental in the formation of the Jan Juc Surf Life Saving Club in 1963. Joe was also a talented surfer who was raised in Melbourne and moved to Torquay after the Melbourne Games. He became far better known in Australia for surfing.

Joe a former Victorian junior swimming champion who competed in Australian Swimming Championships in 1949 took up wrestling in early 1952 successfully challenging the more experienced wrestlers on his way to selection for the 1956 Melbourne Olympics.