Corangamite was certainly a marginal seat in its early days and digging around in its history has turned up a few surprises. The third member for Corangamite was none other than James Scullin, who would go on to become Australia’s ninth Prime Minister in 1929,

Scullin the son of Irish immigrants, a devout Catholic, non smoker and non drinker grew up in Ballarat seemed to have been cut from a different cloth than his predecessors. He was involved in the Australian Workers Union. At the  1906 Federal election he was the losing Labor candidate to Alfred Deakin for the seat of Ballarat.

In 1910 Scullin won his first election as the Labor candidate in Corangamite , when Andrew Fisher led the Labour party to victory

Scullin had worked to establish the labour movement in Corangamite even though its rural character meant it was not considered a seat naturally sympathetic to Labor. His campaign focused on increasing the powers of the Federal parliament and issues such as defending a white Australia, higher import duties and the introduction of a land tax. Scullin was as an impressive and formidable parliamentary debater. He spoke on a wide range of issues over the three years of his term, By the end of his first year in parliament he had a reputation as “one of the most ardent land-taxers in the Labor party and had spoken frequently on breaking up “the land monopoly which has for so many years retarded the growth of this young country.”  Although he was well regarded in his district and hard-working and ardent, Scullin suffered the fate of many Labor members in rural districts in the 1913 election  He tried and failed to reacquire the seat at the 1918 Corangamite bi-election. 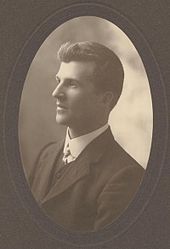