Felix Rosser, a first generation Australian, was one of the first permanent residents of Torquay. He was a fisherman who lived in a shack down by Fishermans beach. His son Harry Rosser was born in 1898 in Torquay.
Harry was only 18 years old when he enlisted in the army and headed to the Western front, He served with the 29th Battalion and was wounded in action but after he recovered he returned to the battlefields.
Only months before the end of the war, in August 1918 was killed instantly when he was hit by a shell.
He was 20 years old and is buried at Heath cemetery, Harbonnieres, France.
A son of Torquay buried on foreign soil.
Felix Rosser died only almost exactly a year after his boy. His mother was so saddened by the loss of her son she put remembrance notes in the Geelong Advertiser for many years after the war.
Lest we Forget. 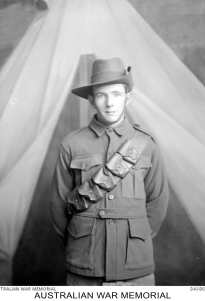