The Surf Coast Shire was created, becoming a democratically elected Council on 25 March 1995.

A garage on the The Great Ocean Road was the beginning of an epic journey for surfing friends Doug “Claw” Warbrick and Brian Singer. They started making surfboards there before..Read More 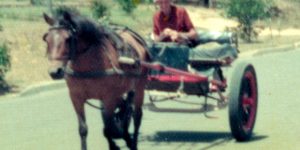 The Torquay Football Club was reformed in 1951 by George McCartney with the first under 15’s team playing in yellow windcheaters with a superman motif on the front. After around sixty years the bathing boxes that had prominently lined the beach start to be removed. By the end of the decade they were all gone. Read more about..Read More

The new post office and residence was opened by Mr S F Kellock, the Superintendent of Postal Serves. The new building centrally located in Pearl Street, at the top of..Read More

Torquay Fire Brigade became a member of ‘The Country Fire Brigades’ Board’ with a fire station to be built on the corner of Anderson and Pride streets.

After the train passed a property in Moriac a fire started. It swept through many properties destroying stacks of hay, miles of fencing and livestock trapped against the fencing. Although..Read More