John Pettitt, Bob’s father, bought the bungalow on the corner of Anderson Street and The Esplanade in 1920 from Dr. Marwood. It was here that the family holidayed every year. During this time John Pettitt also bought the land south of Two Bays to the corner, up Price Street and along Pride Street to the house next to the Scammell, later selling it all. Marianne Pettitt owned the land above Taylor Park up to Rice’s Wood yard.

Bob lived and worked on the family farm ‘Blinkbrae’ at Bell Post Hill on the outskirts of Geelong. Consequently he learnt to be a wool classer. After inheriting part of the family farm during World War 2 he decided to sell this land to buy and clear a farm at Torquay. He bought 1000 acres from Mr. Pargeter in 1937 at £4, 10 shillings and acre.1 He moved the stud sheep to this farm which he called ‘Blinkbrae South’ establishing an Aberdeen Angus stud and Corriedale Sheep stud (Flock No. 199). Bob and Doris married in 1938. During the war years Bob ran 400 sheep on the Golf Links to keep the grass down. 1

His natural interest in Corriedale breeding led him to become a well-respected leader among Corriedale stud breeders in Australia as well as overseas. He was export director for the Australian Corriedale Association and became president of both the Victorian and Australian Corriedale Sheep Associations. He was also Life Governor of the Royal Agricultural Society, its president for 14 years as well as being a staunch member of the Geelong Agricultural and Pastoral Society. Bob excelled in administration and with his wife Doris became a popular ambassador for Corriedales Australia wide, in New Zealand and also South America.

Farmer, local government councillor for twenty-seven years and six times Shire President of Barrabool Shire, ‘Bob’ Pettitt was awarded an MBE for his work in rural and municipal affairs in December 1980. 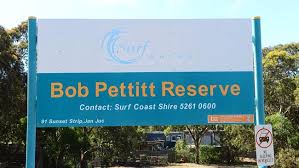 Bob Pettitt Reserve in Jan Juc is named after him.